In Malawi, the Hungry Season of 2020 has been compounded by the current Coronovirus Pandemic. 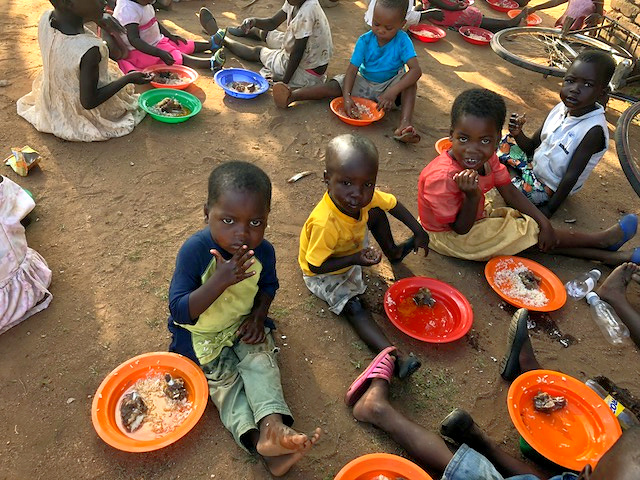 Most of the vulnerable children who are fed at the project are orphans. Being orphans, they live with families other than their parents and are usually a drain on already scarce resources. Most of the families in the Kanyenyeva area are subsistence farmers, growing only enough food for themselves and their family. It is a means of survival but does not produce income. Subsistence farmers are impacted greatly by variations in weather.

“An unprecedented number of people in 16 countries across southern Africa are gravely food insecure as climate change wreaks havoc on the region.”

“This hunger crisis is on a scale we’ve not seen before and the evidence shows it’s going to get worse,” the WFP’s Regional Director for Southern Africa, Lola Castro, said in a statement.

The crisis is impacting 45 million people — many of whom are women and children. The region has been hit hard by repeated droughts, widespread flooding and economic hardship.

Eswatini, Lesotho, Madagascar, Malawi, Mozambique, Namibia, Zambia and Zimbabwe are among the hardest-hit.

Many families across the region are already skipping meals, taking children out of school and falling into debt to stave off agricultural losses, the WFP said.” (Source: https://www.dw.com/en/un-warns-hunger-crisis-in-southern-africa-on-scale-weve-not-seen-before/a-52029274)

Malawians are currently experiencing the hungriest time of the year. It is the time while they are growing and harvesting their crops for the year ahead. They have eaten their harvest from 2019 and have nothing until they can eat from their harvest of 2020.

We know that many people around the world are experiencing a decrease if their own incomes, too, however; a meal for a child costs $.50. A donation of $10 will feed 20 children! No amount is too small. Please prayerfully consider donating to help the children in Malawi be fed. Click here to learn more about how to donate.