The orphan care project began as a grass thatched shed on a piece of land. In 2008 a storage building was begun but not completed due to lack of funds. In 2009, a generous donation was received from Mr. Bob Enskat for a meeting hall to be constructed.

There were some leftover supplies so the storage building was completed. In 2011, the storage house was converted into a coop for chicken.

After a capital improvement fundraiser in 2012, funds were raised for well to be dug and a kitchen to be constructed. 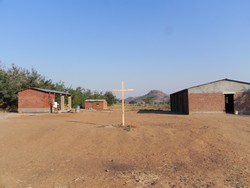 The well was dug in early 2013. This infrastructure was made possible through donations. 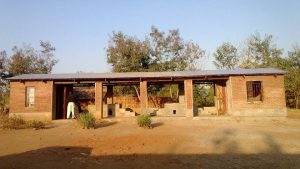 The kitchen was doubled in size in 2015 thanks to Joy Lutheran Church in Winnipeg, Canada. 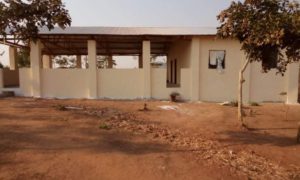 The latest project at the Kanyenyeva Orphan Care Ministries location is a new Skill Center Building. The Skills Center currently houses the Days for Girls (DfG) Enterprise, which is a registered DfG business called Kanyenyeva Wala (Kanyenyeva Shines). Thanks to a grant from Westwood Community Church in Minneapolis, Minnesota, along with many individual and corporate donors, the new Skills Center has an office, storage room and approximately 1200 square feet of open-air, covered space as a multipurpose area for the women to sew, students to read, or children to use as shelter and shade from the weather.

Kanyenyeva Ministries would like for the future infrastructure to include a house for a watchman and visitors, a school, and a medical clinic.

Any donation amount will continue to help build the infrastructure needed to care for the orphans of the Kanyenyeva area.