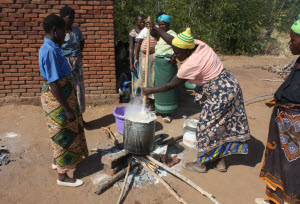 Most of the cooking in Africa is done over an open wood burning fire. The “three stone fire” is not a very efficient method. The wood is scarce, leads to deforestation, and creates smoke that creates health problems for the caregivers. And when it is raining, the women are unable to keep the fires burning.

In 2012, a fundraiser to dig a well raised enough money to add an outdoor kitchen in addition to the well. The cooks at the orphan project asked for an outdoor kitchen that would provide shelter from the rain and sun for up to 10 women, with an enclosure to store the cooking equipment. 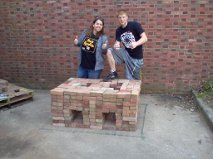 Professor Ken Ekegren had his engineering technology students at North Central State College design, build and test a more efficient style of stove that could handle the large quantities of food prepared to feed lunch to over 300 children. The students designed a two burner wood burning stove that was used as the model for the final stove in Kanyenyeva. 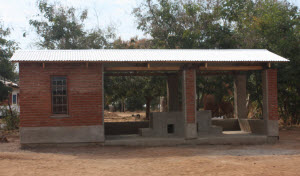 During the service trip, the women at the project were consulted in the overall design of the kitchen and storage room. They specified the wall height for seating and the steps to reach the large cooking pots.

The kitchen was built in July, 2012, and began being used in August. The kitchen has a storage area for the pots, plates and utensils used in the feeding program.

We are told that the kitchen works well and the women are thankful for a shelter to cook under with a wall height just right for seating.