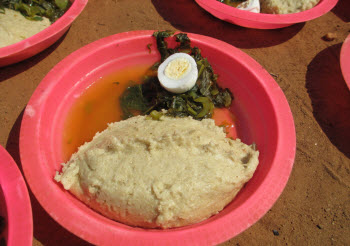 This is a typical meal in Malawi. The largest part of the meal is nsima which is made with corn meal and water. It has no nutritional value but it does help a person feel full. In a typical year there is enough food to last through most of the year and into the next growing season. The end of the growing season is called the hungry season because their food from the last harvest does not last until the next harvest.

This past growing season (2015 – 16) the hungry season started early. It started at the beginning of the growing season, around November, because in the 2014- 15 growing season the country of Malawi’s harvest was decreased by 35% due to lack of rains in some areas and floods in other areas.

The coming hungry season is anticipated to start even earlier. They expect the hungry season to start before the growing season starts. The latest harvest was 15% less than the previously smaller harvest. 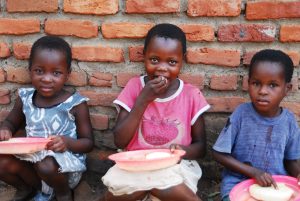 This is a grim reality for millions of people in Malawi and elsewhere in Africa. From the beginning of the last growing season, around November, 2015, the orphan project doubled the number of children it feeds to around 800 children.

For more information read this article in the Guardian.com.